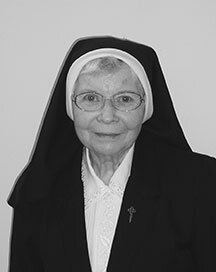 Sister Anne Ebersold, a member of the Marianites of Holy Cross, died at St. Francis Medical Center, Trenton, New Jersey, on December 23, 2021. She was 94. Born in New York City in 1927 to Henry and Anna Ebersold, Sister Anne was the second youngest of eight children. Her childhood dream was to become a nurse, a dream that she fulfilled when she received her BS in nursing from Manhattanville College of the Sacred Heart in 1949. Introduced to the Sisters at French Hospital, she entered the Marianites of Holy Cross in 1955 and made final vows in 1960. Sister Anne lived the mission of the Marianites, incarnating the love and compassion of Jesus Christ through her nursing ministry at French Hospital in NYC, St. Joseph Hospital in Lac Megantic, Canada and Hȏpital Notre Dame de St Croix, Mont Laurier, Canada. Upon returning to the United States, she became a charge nurse at Mater Dei Nursing Home in Newfield, NJ in 1970. In 1974, her religious community asked Sr. Anne to be the Novice Mistress. After two years, Sr. Anne resumed her beloved nursing career at Mater Dei. In 1992 Sr. Anne earned her administrator’s certificate. She served as the administrator of Mater Dei from 1992 until she retired in 2010 to Hamilton, New Jersey. Born to bring God’s love to the sick, Sr. Anne then earned a certificate in Pastoral Care and served as a pastoral care associate in St. Francis Medical Center, Trenton. Sr. Anne is lovingly remembered by her surviving seven nieces and nephews, her Marianite of Holy Cross sisters, her co-workers, and the families of the patients she served. A woman of faith, she touched the lives of many through her compassionate concern and prayers. Mass of Christian Burial will be celebrated on Tuesday, December 28, 2021 at 10:30 AM at St. Raphael’s Church, 3500 S. Broad St., Hamilton, NJ. Burial will follow at Marianites of Holy Cross Cemetery, Princeton, NJ. Relatives and friends may call on Tuesday from 9:30 to 10:30 AM at St. Raphael’s Church.
To plant a beautiful memorial tree in memory of Anne Ebersold, MSC, please visit our Tree Store
Tuesday
28
December